Pillow Talk
First, some old country to get you in the mood.
Talking in Your Sleep~ Crystal Gayle 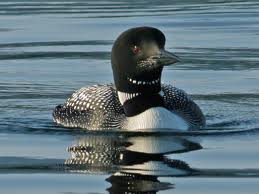 One night this week, I had a rude awakening...literally. My husband yanked my pillow out from under my head, smiled at me like a loon and rolled over.  Okay, technically, this-->
is a loon and he looked nothing like that.

But, that's not the point.

The point is this happens frequently. 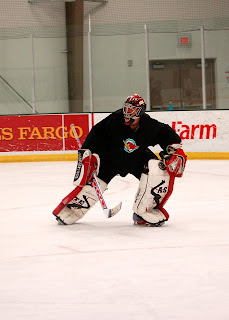 It's worse when he's been playing hockey. He's "windmill" saved my pillow in the middle of the night, "kick" saved a two-liter bottle of Coke off the coffee table while he was sleeping on the couch, and carried on complete, if incoherent, conversations with me of which he later had no memory.

The most interesting happened right after we were married.

I woke in the middle of the night to him petting my hair like I was a Cocker Spaniel and laughing manically.

If he knew I was telling you all this, he would throw in his own story about the ONE TIME I did something similar.

He came to bed after I'd been asleep for a while and I demanded to know if he "filled up the forest".

Yeah, I don't know. I completely remember the conversation and at the time it made perfect sense to  me. The next morning? Not so much.

For another interesting sleep story, you can read about the Cookie Monster, Marvin the Martian and why I will never do drugs.

Email ThisBlogThis!Share to TwitterShare to FacebookShare to Pinterest
Labels: chasing someday, dawn alexander, talking in your sleep, Tell Me Your Story Tuesday, writer in waiting

Oh, my.
Fortunately, we aren't too busy on the sleepwalking/talking/macarena-ing front, though every now and then Mr. Stanley wakes up at about 1 a.m. and gets ready for work. Once he even made it to the entrance to the subdivision before he realized he was about six hours too early.

I don't talk in my sleep, but my husband does every once in a while. Not only that, but you can ask him anything, literally anything, while he is asleep and he will answer you truthfully. I call him my unconscious honesty meter. Problem is... I have to be careful what I ask him because let's face it, no one really wants to know whether their husband thought they looked fat in that dress.

Teri- That's too funny. Didn't he think it seemed a little dark and empty for everyone to be heading to work?

Trisha~ I know what you mean. My husband doesn't rat himself out like that, but I know I'm in trouble when I get what I call "Overly-friendly Scotty."

That's when I say, "Honey, it's time to get up." He responses with "Oh-Kay!" in his best cheerful voice. Nope, not awake yet.

I remember when our alarm went off and I saw him hovering over the clock but it just kept going off. Had no clue what he was doing, but when I woke up, the inside of a brand new roll of toilet paper was ripped out and shreds of TP were all over the floor on his side of the bed. LOL Guess he thought he was kicking that clock's butt. I still laugh over that.