The Other Half: Husband of a Romance Writer 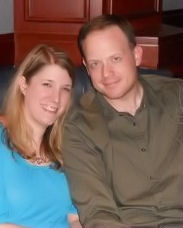 I knew she was super intelligent, witty, and she liked 80's hair metal (this was extremely attractive for sure).  I definitely didn't see the romance author scenario as a possibility.  When I met Roni, and for the first few years of our relationship, she was in college preparing to be a counselor or therapist.  Early in our relationship she told me that she wrote a love story when she was 15.  I guess that should have been a sign of things to come.

What is something you can tell us about Roni that most people wouldn't know or expect? (With her permission, of course.)

She is one of two people on the planet to have seen a Britney Spears and Metallica concert in the same month.  You can probably guess who the other person is.

What was your first reaction when you realized she was actually going to be published in this genre?

It was surreal.  I was so excited for her.  I think we may have done a happy dance for a few minutes together.  I assure you that the dancing was very good.

What has been the most difficult part for you of Roni's writing career?

Writing and maintaining her web presence is a huge commitment that keeps her "working" most hours that she is not sleeping.  We consciously shut everything down (both of our computers) each night after our son goes to sleep and catch up on reality tv.  Isn't TIVO one of the better inventions in recent history? (Yes, yes, it is. )

What has been the best part for you?

Ok, if you have a cheesy alarm this could set it off (but it's true).  Here goes.  I get to see my wife fulfill her dream of being an author.  Another "great" thing I should mention is that we have some really interesting dinner conversations about plot twists, scenes, and character development that make most couple's dinner conversations seem kind of lame :-)

Do you have any hesitation about telling people what she writes? How do you handle that?

I had to tread lightly around my mom and dad.  There was just no way around that.  Other than that I'm not really hung up on talking about it.  I approach life with a pretty carefree attitude and don't judge people.  If someone is offended in some way or closed to the idea of the genre they probably weren't high on my "I hope they aren't offended" list anyway.

What is the general reaction of your male friends? Lots of "way to go" "nudge, nudge, wink, wink" ?

I've only had a couple of examples of this so far.  One of my friends from high school called me and just said, in a very loud voice, "DUDE, ARE YOU SERIOUS" about 15 times then hung up.  Another said something like "dude, that's pretty strong man".  Guys aren't like girls.  We don't share a lot of relationship information with each other.  We just gather a miniscule piece of information, make all of our assumptions based on it, and we are good to go.  If they've been to Roni's website they probably think I'm way cooler than they are letting on to.
How do you really feel about the Boyfriend of the Week post? It's okay. You can be honest. We won't tell her.

Is this a trick question?  Did Roni make you ask me this!!!  :-)  Early on it was difficult to have my wife sharing her crushes (aka: mancandy) for all the world to see. I'm ok with it today.  We had some interesting conversations in the early days of this topic.  It actually helped me gain insight to the way girls "feed" on fantasy.  I harbor no ill feelings towards any guys who have been featured on BOW.

But just for the record...
-the average BOW is not able to climb into their SUV without the assistance of a step stool.

It all hit home for me when I saw her book on the shelf at Barnes & Noble.  That was my lightbulb moment so far.  That's insane!

Thank you so much for stopping by, Donnie.

Posted by Dawn Alexander at 2:00 AM

You've got a great guy there, Roni! So many congrats on the book and, wow, you have a wonderful family to boot! Lucky girl, but well deserved:)

I loved this post! People always ask my husband if he's read my books. (I don't write erotica but my romances are pretty hot!) He hasn't read my books - that I know of - more because I don't think they'd interest him than anything else. He supports my writing and is proud of me and comes to my book signings/library talks. And we do lots of joking around about research :)!

When we got married I was a nurse on the management fasttrack who never read more than a magazine article. There is NO way he'd ever anticipated (or that I had for that matter!) that I'd one day be a published romance author!

Here's to men who support their wives' pursuit of their dreams...no matter what those dreams may be!!!!

Wow, such an interesting interview! I wonder what his parents -did- think when they found out? XD

Thanks Donnie! And Dawn. I think Roni is pretty swell, and it's so great (and funny) to hear about her other half!

Dude, ARE YOU SERIOUS??

Great post. You are too cool to agree to this, Donnie, and Dawn you are so smart to think to ask. Those of us with supportive spouses are very lucky and perhpas in the minority. I can't immagine how I'd do this without my hubby's full support. Thanks for a great Valentine's post.

Thank you, Donnie and Roni! And, thank you everyone else for dropping by to support them.
Happy Valentine's Day!

Dude.
Thanks for sharing. I wonder...do you read the stuff Roni writes? And if so, do you ever go..."uh, I hope you don't really want to try that"?
I only ask because I talked to an Ero Rom writer once who had published a lot of stuff, and she said her husband never reads what she writes! Maybe because it was all like MMMMMF stuff, but still.

Donnie strikes again with his male hummor so similar to my own hubby's putting a smile on my face.

My question would be - Did you have to work up any courage to take on these interviews for Roni?

I have read Roni's materials (through Crash into you). I can see how some husbands would be freaked out. It's an adjustment. But I'm completely comfortable with it. I don't think that authors who write books with a murder in the story have spouses who think "oh crap, my husband/wife is a complete psycho killer". So I apply the same logic when I read something that Roni writes that may be way out there. BTW, if I were to read a MMMMMF Roni wrote, I would envision putting the other four guys to work around the house while I took Roni out to dinner. Seriously, that's how I'd handle that. I could use some help with projects. Don't need any for my lady :-)

Not really. During the first year of her career I wasn't sure how to interact (or if I should). Once I was featured on her blog I realized its great to interact with people who love Roni and her work. I'm comfortable doing this.