Interview with an old friend 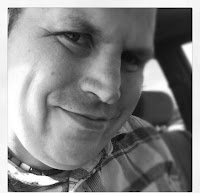 Sean and I go way back. I mean, big-hair-and-blue-eyeshadow kind of back. Talking about me, of course, not him. He never had big hair. In fact, we had a serious discussion about what pictures would and would not be shared for this post. You see, there was this play where he played a priest and I played, well, a ditz basically. My best line was "I like his hair...so much." What is that?

Anyway, Sean is now an entertainment reporter as well as a writer-in-waiting novelist. Of course, I had to have him for Tell Me Your Story Tuesday.

Let's get to know my friend, Sean.
Ah, the glamorous life of an entertainment reporter. It's all free movies, champagne and prestige, right?
Being an entertainment writer is a great gig if you can get it.  I am published in the Moore Monthly and I am read by literally dozens of people every month…dozens! Sure, I see movies early and for free but there is a downside.  People don’t know about the pounds that I have packed on eating extra-butter theater popcorn two to three times a week, do they? I suffered the worst of Adam Sandler for my readers. I saw “Jack and Jill”. I watch those bad films so you don’t have to. It is a public service.

How did you get into this?
A friend of mine once gave me the advice, that when you are in a meeting where you clearly do not belong then just act like you do. I took this advice when I was asked to meet with the editor of the Moore Monthly. We had made an acquaintance in social media and he had been impressed with some freelance writing that I had done for a site called OKC.net. I had written a story about taking my young children to the annual Flaming Lips New Year’s Freak Out and titled it “The Family Who Freaks Out Together”.

My unique angle on covering the show impressed him and I found myself having lunch with him. I was terrified at the prospect that this was a sort of job interview veiled as two guys eating sandwiches. Now, I had published freelance but this was a possible regular gig. I was nervous but took my friend’s advice and acted like this was the sort of thing that happened to me all the time. It worked out and I am now a professional entertainment writer. I have parlayed that in to becoming a member of the Oklahoma Film Critic’s Circle, a recognized professional society for film criticism.  Which, I have used to get more freelance writing work.  I just keep having meetings and pretending that I belong there.

What do you look for in the movies you review? Do you take notes or rely on your own memory?  Do you like to have company for a discussion afterward or do you prefer work alone?

Movie studios and promotional companies offer free screenings for the press and for “word of mouth” hype. Usually, these screenings are a few weeks before the actual release of the film and are used to build a buzz around a production.  These screenings are for the press but also for an audience of people who win tickets on the radio or receive them through some other promotional source. When I see a movie, it is in a crowded theater of people so I can gauge their response and measure it against my own. I don’t take notes. I do varying amounts of research beforehand but go see the films the way that any movie-goer would. I bring a friend or my children if it is a family film.  I get popcorn and candy.  I experience the movie.
My work starts once I am walking out of the theater and I start to distill from my immediate impressions that recommendation of what to expect from a film. I relate my biases upfront and then try to present as balanced as possible a review. I am not picky when it comes to which films I will see. I keep a calendar of all the screenings I can possibly attend and then attend as many as I can. If I do not write about a movie for my regular column then I will usually write something freelance for another outlet about the film. I will see anything because every movie that I see is potential income for me.

What is it like to leave the theater knowing you are going to write a negative review? Do you feel guilty at all or is all business?

Too many critics seem to me to be professional contrarians. I try to be balanced in my criticism of a film. In the end, I am such a fan of film that there is very rarely a movie that has nothing redeeming in it to me. If there is only one worthwhile performance then I will not fail to mention it. Movie-making is a marvelous thing to me and as a critic, I can be like someone watching prestidigitation at a stage show and trying to guess at how the tricks are done and pointing out the wires. In the end I still want to be amazed. I still want it to seem magic.  I still appreciate the art of making-believe. I mean as a writer, I appreciate the magic behind the creation of worlds from whole cloth.  I have such a reverence for film and every part of the process.  I hope I show that in my criticism.

You also write fiction. What genre? Tell us about one of your work in progress.

I am not sure. I call myself a speculative fiction author. I am writing in the genres that I am drawn most to read. My fiction is some combination of horror and sci-fi, maybe the horrors of science (although my science is as much psychological and social science as anything else).  Hanging a name on a story and categorizing it is limiting it to follow certain tropes or expectations. It has been suggested to me that I write slipstream fiction. I am not quite sure what slipstream as a genre really is exactly but I like what Bruce Sterling wrote about it: "...this is a kind of writing which simply makes you feel very strange; the way that living in the twentieth century makes you feel, if you are a person of a certain sensibility”. I get that.  Out of place or out of your mind is sort of what I am shooting for in the atmosphere of my writing.

What authors have shaped your vision of what you want your writing to be?

I am currently reading through everything in our local library written by Philip K. Dick. Immediately before that, I was rereading the short fiction of Lovecraft. I have very few books as I tend to pass them on quickly but I am literate and an autodidact so I consume the resources of my library voraciously.  I would probably say Philip K. Dick and Kurt Vonnegut are huge influences on my thinking and writing right now. However, my overall vision is colored by piles upon  piles of yellowed pulp  science fiction and fantasy novels that my parents had collected.  My first advice to anyone who likes to write besides ‘Just write’ is to read. Just read.

As of now, you are unpublished in fiction. How do you keep yourself motivated and writing ?

I have published very little in fiction (a few short stories in independent small press magazines). I have written however quite a lot. I spend most of my week working on freelance journalism.  After the freelance journalism work is written, I take time every day for my fiction.  The time varies on my workload. I am starting to feel a pull in the direction of submitting my fiction work and investigating places to publish (and self-publishing options) especially as I get close to finishing my novel.  I really feel like it isn’t hard to get motivated to write, it is hard to do the work of getting that writing seen by others and making a living from that writing. That is daunting. The writing is the easy part in comparison. The process of submitting that writing and getting it seen is what takes motivation.

Where do you see yourself going in your writing path? Five years from now, what do you hope to have accomplished?

Writing. I want to be writing. A few years ago, writing was a hobby for me. I was a retail manager for a big box store. I hated my job and I used writing as an escape. I was stuck in a profession that I found tedious and I was absolutely “adequate” at. I decided not to settle for being mediocre and feeling trapped. There was better money in retail but my heart was in writing. That sounds like a bold choice and may be the best move of my life if I can somehow make writing my career. I am a freelancer. There is a certain grind to freelancing but it doesn’t pay a lot and you have to really work it to make it work. The five year plan is to make the most of every freelance opportunity that I have and to start taking more “meetings that I don’t belong in” with fiction editors.  Keep working on my craft and keeping my fingers on the keys. If I am really living the dream, then I am going to combine this freelance journalism gig with a fiction writer gig. Ultimately, to be a working novelist and write to support myself would be the dream fulfilled. Any way that it happens, I am going to keep writing.

Thank you so much for doing this, Sean. It was such fun.
You can find Sean at his blog:   http://verynovel.wordpress.com/ or like his Author page on Facebook.

You can also ask him questions in the comments here. Feel free to ask him about me in high school. He may know where some of the bodies are buried, but I've got pictures, so I ain't scared!

Thanks! I'll need it.

Great interview! Thanks for sharing.