Molly is celebrating the release of her debut
Small Town Secrets 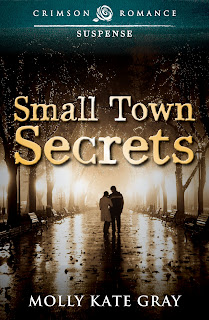 Miller’s Grove’s most eligible bachelor, Josh Owens, could have a different date every night of the week, so he doesn’t understand why he’s drawn to Tara since she’s obviously not interested in him. Tara Sullivan is angry that he’s stolen the coveted prime-time anchor position she’d been promised.
A stranger begins preying on the single young women in Miller’s Grove, and the story’s assigned to Tara. As the number of victims grows, Tara reluctantly accepts help from Josh. As he researches his top suspect in the assaults, he unearths events in the past that more than one resident of Miller’s Grove wants to keep hidden.
Together they discover a web of conspiracy and lies involving the most powerful family in town. Josh and Tara put their reputations at risk in the hope of exposing the truth and, perhaps, finally bringing Tara peace.

Let's get to know Molly!
The cover is beautiful. How happy were you when you finally got to see it?

I was really nervous waiting for the cover.  I had such a specific picture of Miller's Grove in my head, I was going to be really disappointed if it didn't look as I'd imagined it.  I created Miller's Grove after I visited a town in eastern Georgia.  I loved the thick trees, rolling hills, the river that roared through the town.  I'd just barely begun to plan out Small Town Secrets, but when I stepped foot in that Georgia town, I knew I'd found my setting.

And when the cover came....yeah, real tears.  The cover is perfect - fog, fairy lights in the park trees, little bit of fog - couldn't have asked for better.  I've said it before, and I'd say it again, I'd marry my cover.
How long have you been writing? When and how did you decide to become a writer?

This sounds like such a non-answer, but I really can't remember a time I wasn't writing.  One of my most vivid school memories was winning a creative writing contest with a story about a haunted house where everyone who dared to enter...turned into a rubber band.

More recently, I was encouraged to become a writer by my husband.  I'd taken to writing fan fiction as a way to save my sanity during the time I home schooled my kids.  When returning to work as an elementary school teacher began looking less and less likely, Steve encouraged me to consider it a sign that maybe I was supposed to concentrate on my writing.  He's been amazingly supportive in the process.

What is your writing process like? Do you plot every word or just sit down and start pouring out words?

Hmm....  I always have my last chapter written before I get started.  I don't think I'd know if I "got there" without a destination in mind.  I normally have a couple of middle chapters written as well - for the romantic suspense stories, I try to write my "big climax" scene before getting too far along in the story.

Other than that, I'm not a big planner.  I'm very much a "by the seat of my pants" kind of writer.  I have my destination in mind and I just write till I get there.

Tell us about your working in progress.

I write a few different genres.  My original love is YA paranormal.  However, after talking with an editor at a national convention, I learned that breaking into the YA market is insanely difficult.  The editor liked my work, though, and encouraged me to try to get published in a different genre so agents would be more open to representing me.

So....since I was already wanting to refine my ability to write romantic tension between my characters - turning to romance seemed a natural (and helpful) step.  Fade to Black is my current work in progress.  It's the second book in my "Welcome Home" series.  Rory is an undercover police officer sent to find the source of a drug problem at a prestigious university.  Her handler, Zachary, lost one undercover partner in the past, and he's not planning on losing her.  The first book in the "Welcome Home" series, Playing with Fire, will be released in December.

Where do you get inspiration for your stories?

I honestly have no idea.  Small Town Secrets started while I was on a trip to Walt Disney World with my family.  The story opens amid the chaos of families attempting to escape the "happiest place on earth" when a hurricane is bearing down on Orlando.

Where do you see your writing journey five years from now?

I honestly don't know.  I hope Playing by the Rules has been completed by then.  It's an awesome blend of YA romance, mystery, and a dash of paranormal.  I really like strong female characters - both in my YA writing and in my romance.  I'm hoping I have at least one YA story published within five years.

What is your first reaction when someone says, "Oh, I would love to write a book." ?


I wonder if they're feeling okay.  I adore writing, and I can't complain about the road I've chosen...but I know how very isolating it can be. I've had several people talk with me about the idea of writing a book, and I always recommend finding a supportive writer's group to link up with.

What's the coolest thing you've done as an author (hint: I believe there was a story about hot vampire guy holding your hand? ) 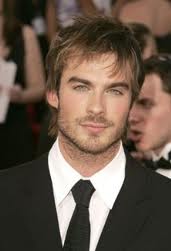 Ha ha!  Meeting Ian Somerhalder.  Sadly, that really had nothing to do with my writing career, but it was awesome and still is my biggest claim to fame.  I used to work on as a moderator on a board for a popular CW television show that Ian just happens to star in.  When he came into town for a fan event, I went (and was asked by the board owner to pass a message to Ian).  Ian was amazing.  The event's security staff tried to get me to move on in the "meet and greet" line, but Ian was talking with me about my work on the forum.  He took hold of my hand (to signal to the security guys to let me stay put) and held onto it until he was finished talking with me.  Yes, his eyes are just as blue as they seem...and they're even more hypnotic in person.

Thank you so much for stopping by. I'm just going to look at the pretty picture and daydream for a while, but the rest of you can get to know Molly better on her website or as @mollykgray on Twitter or Facebook or leave her a comment here.

I don't know if I would be more or less frightened by a haunted house that turns people into rubber bands!

Hi, Molly!! It's nice to meet you!! Your book sounds fantastic and I'm totally jealous you got to meet Ian!! He's kinda my boyfriend. LOL

Susan - Yeah, I know the rubber band people were kind of...twisted. Still, I was very proud of my ribbon the story won.

Tiffany - I'll admit, I was having trouble breathing when I was face to face with Ian. I definitely won't ever forget that experience. Glad you think the book looks interesting! I really enjoyed writing it.

Great cover, and I loved the story about meeting Ian. It's always nice when the famous people you like turn out to be good guys in real life, you know?