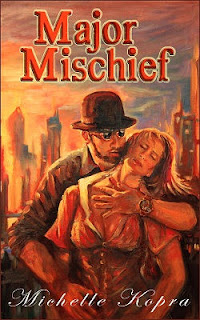 Michelle was one of the first people at met in my RWA Chapter (NTRWA). I am very excited to have her visiting today. Michelle's book Major Mischief is now available through Amazon, Smashwords and Barnes and Noble.
Let's Get to know Michelle!
Do you have a writing routine? What does it look like? Where do you usually write?
I do! I pack the kids off to school (or summer camp). Then I make myself tea, light some candles, listen to some meditational music, and then get started at my dining room table. If I’m feeling particularly lazy I’ll sit on the couch in front of the fireplace. I’ll write 1k to 2 k words depending on how inspired or blocked I’m feeling that day.
Tell us about your e-book. Where can we get it? How did you make the decision to e-pub?
My brother offered to paint the book cover for me. I knew if I submitted the story to a publisher, the chance of me having control of what the cover looked like would be slim. So, I hooked up with an editor, the rest fell into place. I published with Smashwords and have the story available at Amazon and Barnes and Noble as well.
Do you have any special time management tricks for working in writing time and living a normal life?
Not really except I try to write when my children are at school. . This gives me time to be with them, and I don’t burn out on writing.
What is the best advice you have received about this journey? Read, read, read! Write, write, write!
What sources do you use for inspiration? ( Music, movies, people watching)
Types of music will inspire me to write certain stories. For example when I was writing Major Mischief I listened to alot of steampunk music. Also, watching Doctor Who has also helped along the current project.
What do you do when you aren’t writing?
I day dream about my current story, as well as stories I plan to work on.
Tell us a bit about your work in progress.
Currently working on a sequel of sorts from Major Mischief, Ruby has landed herself in a spot of trouble on a far away planet. I’m also working on a short story about a pink fairy, and another steampunk about belly dancing.
Here is a little blurb for you about Major Mischief:
Ellie is trying to prove to the world and to her mother she is more than just a woman to be dragged to the altar, and forced to bear children. Even though she feels an attraction for the strange man that helped her escape her maman, she fights it, determined not to give up her freedom.
But the attraction only grows as they go in search of her uncle and his partner, who have been kidnapped by a very naughty Troll determined to take over the world with Uncle René’s invention, a portal machine that not only opens the door to other parts of the world, but to other dimensions.
As they adventure across the world, can Major Grey Caudle convince Ellie Hawke that they belong together? Even if he is an elf from a highly advanced world and she is a human from Victorian earth. Will he make her understand that she does not have to give up her work, her teaching, or her inventions to be a wife?
You can find out more about Michelle and Major Mischief on her Facebook Page.
So, anything else you want to know about Michelle? Or Steampunk? Am I the only person left on the plant who hasn't see Dr. Who?
Posted by Dawn Alexander at 2:05 AM

No, actually, I've never watched Dr. Who, either...although I know who Dr. Who is!

Your book sounds like great fun, Michelle, good luck to you!

I've only caught pieces of Dr Who here and there. The book sounds funky. And I had no idea there was a steampunk musical genre!

Michelle, sounds like your family is super talented. The book sounds intriguing and the cover is awesome. Congrats, to you and your brother.

I haven't watched Dr Who, but now I may check it out!

Good luck and many sales

Great interview, Michelle! I love how well you blend genres.

Thank you to everyone who stopped by to support Michelle. I am curious about the Steampunk Musical Genre, can you give us some examples?

So cool to meet you! Your book sounds really great. :) Great interview, Dawn!

Abney Park would probably be the best known in the genre. but there is also Voltair and the clockwork dolls.

Thanks for interviewing me Dawn!