I love watching award shows. I suspect about 90% of the people who watch them are like me. We just want to make fun of what the people are wearing. The Golden Globes on Sunday did not disappoint.  Everyone seemed to competing for the Worst Dressed List, I mean seriously, what is this?

Even for a group of actors, there were very few "normal" people. Yes, I know it's Hollywood. Why would I expect them to be normal?  As I chatted on twitter, we noticed there seemed to be three extremes.
Painfully thin
Stereotypical Big and Beautiful
or
Old.

When did this happen?

Shouldn't there be a few people who look like you and me? I mean, if they aren't real people but play one television, shouldn't at least one or two look..., well, ordinary?

Honestly, I didn't spend much time pondering the philosophical quandaries of the American standard of beauty until I was sweating my tail off on the treadmill, staring at these:
If you aren't familiar,
These are Monster High Dolls.
They are the current generation's anti-Barbie. I grew up a proud owner of more blonde plastic dolls with questionably logistical figures than anyone should ever have, but I don't remember consciously comparing myself to her or believing that was how a woman "should" look to be thought of as beautiful.

I could proudly say I don't feel my daughter are being influenced by this either... until you see this. 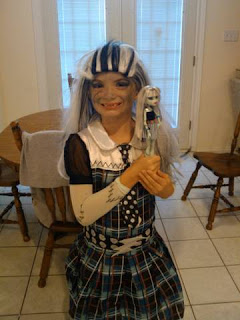 So, tell me your story.
What is your definition of beauty?
Do you think the world is really looking for frail, skin-pulled-taunt-over-a-skeleton types? Or Big, round and proud? Or somewhere in between?

Can you reassure me my daughter isn't going to dye her hair and her skin blue in an attempt to become Frankie Stein? Feel free to lie, it's okay.

Posted by Dawn Alexander at 7:01 AM

Hey, Dawn. I like to think, as a society, we're moving into just being more healthy: eating right (we all know that doesn't include a bowl of ice cream every night--sigh), getting plenty of exercise (hard for us writers who need to keep our buts in the chairs and our fingers on the keys (while I type very fast, I don't think that's what the "experts" mean when they say excercise), drink plenty of water (okay that's not too hard), and get plenty of sleep (more difficult, since for many working writers the only time to wirte is late at night). However, I have to agree with you. Just lately, I've noticed a slew of folks on tv, who seem to have gotten thinner. Now, these were people who IMHO didn't need to lose any weight and yet they did. Having struggled with issues of weight for many years, let me assure everyone, it's not the number on the scale that messes us up. It's the number or picture in our heads of what's okay. Try to not let the crazy picture in your head keep you from enjoying where you are. That is something I do think we can blame somewhat on the media.
Well, Jeez, Dawn, you sure punched my button. Oh, by the way, you're daughter will be fine. She'll go through a few stages, probably including not caring for you a whole lot, but will emerge on the other side becoming a good friend. That's one of the best things about being the mother of daughters. I'm blessed to have two super ones.

I have been fighting that picture in my head for a long, long, time.

I am glad to hear that my girls will turn out okay. There are days I worry. :)