Letters I never meant to send 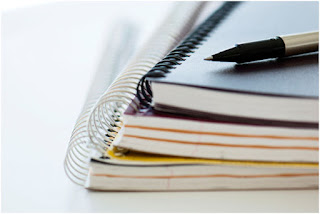 I have probably 20 of these kinds of notebooks in a trunk in my attic. They are filled with stories and dreams. Some autobiographical, some completely fiction. So, why are they on my mind today?

Because of the tragic case of Susan Powell. If you are not familiar with this case, Susan Powell is the mother of two who disappeared in early December of 2009. Her husband, Josh, has been considered a "person of interest" and now her father-in-law has been arrested for voyeurism (which may or may not be linked to her disappearance).

While the mystery writer in me is undeniably drawn to the case,  I was appalled by a recent move by her husband and father-in-law to publish her teenage journals.
From Forbes.com :


Her family says the entries were written by a young girl still growing up and have no bearing on her disappearance. They got a temporary order in a Washington court prohibiting the Powells from distributing the journal pages."

I was a closet writer in my teen years. My journals were filled with a mixture of reality and fantasy with no discernible difference in the two. I once spent two weeks grounded because my parents "accidentally" read part of my notebook. I was too indignant over the invasion of my privacy to admit most of it was complete fiction. (Mom~ the 21 year-old you thought I was planning to sneak out to see didn't even know I existed. He was a friend of a friend's older brother. I met him one time for approximately 2.5 minutes.)

Even the parts that were "true" weren't the truth. Why? They were being recorded through the eyes and mind of a teenage girl. Just as Susan Powell's family says about her journals, mine were written by someone still growing up. While who I was then may have played a role in  who I am now, it certainly isn't who I am now.

What about you? Have you revisited your teen self lately? Can you fathom the idea of all that confusion and angst being on display for the world? Especially if you were unavailable to defend yourself?

When I moved about ten years ago, I ran across an old diary. I burned it in the outdoor fireplace.

I think teen years are filled with confusion. Alot of the stuff I had written were half truths...or you could call it my first fiction. I was never that girl in the diary. I think there was a time that I wish I was.

I had 30 journals like this, maybe more. Wish I'd saved them for fodder for my YA. LOL. They were full of angst and like Loree says, first fiction. I'm sure there were entries where I sounded so sad, that it would have come across as suicidal, though I never was.

I came across a book of poems and anecdotes the other day and really thought about posting some of them to my blog in a sort of "letters to myself" kind of format. But, you know what, I put them away again. Twenty-five years later, and it still feels too close. LOL.

I learned the very hard way never to read another person's journal. Likely there is stuff in there you don't want to read, and some of it might not even be true.

I think this story is awful to contemplate. You cannot draw conclusions about an adult woman from her teenage journals.

Loree~ I have kept mine, but I am not sure why. On one hand, I don't want my daughters reading them, but on the other, I can't imagine destroying them.

Kristine~ I know what you mean about it still being too close. Some of them, I can't even read.

Chloe~So true. Everything you said is just so true.

I've kept a journal since I was quite young. I don't know if it's fortunate or unfortunate that all my journals up to that point burned in the house fire or not. My teenaged journals, if I remember correctly, were as full of angst as any girl's would be. It would be my early twenties diaries that I miss most. I know I'd written about having the kids and other "deep thoughts". Overall, it's probably for the best they're gone.

In the journals I keep now, I will occasionally make an entry to a future reader, most generally a family member reading it after I've died. lol

Tressa~ I have been tempted to go back and read mine from my early twenties, especially from when I first met my husband. Wonder if my first impressions of him would still hold up today. :)

I never thought about leaving an entry for a future reader. That is a great idea.