Dawn's Plot Swap
Have a plot? Leave one
Need a plot ? Take one
I am feeling kind of random today. So, this swap is a mixed bag. In honor of all the responses I got to my gecko post yesterday, I've included two "EWWW"-inducing stories and, of course, gnomes. Because everything goes better with gnomes.

Player startled by snake in helmet

Gravette High School senior Darrick Strzelecki said he felt something odd in his helmet during practice Tuesday, but thought it was only a tangled lock of hair or sweat beading up as the team worked on extra points.
It was a 10-12 inch snake! Kind of makes my gecko look small and inconsequential, huh? Imagine working that into a creepy, stalker plot. Psycho girl puts snake in boy's helmet.

Rachel Fisher said she was driving the sport-utility vehicle on Sam Cooper Boulevard with her husband...when the snake emerged from beneath the hood and started slithering on the windshield.
"and that's why the car is totaled, officer."
This could be a great start to a romantic comedy or maybe a horror. It could easily set the tone either way!

The creatures vary in sizes and materials and were part of what is believed to be an end-of-the-year prank at Capital High School.


About 20 gnomes were affixed to several locations at the facility, including on the roof, at the end of May. 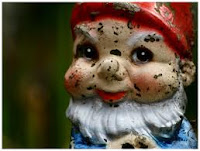 So, swap with me. What would you do with these? Or your own stories this week? You can check out the comments of yesterday's post for more "icky" stories.

LOVE the snake on the windshield/romantic comedy twist!!! *taking notes* I just might use that. :D

Oh! My plot? Hmm... I just told some writer buds last night about this awesome car I saw last night. I think it was an older Porsche - you know how their headlights look like eyes. But it had almost no grill so it looked like its lips were set in an thin line. But the color! It was not glossy like most cars. It was all black - matte like matted pics vs glossy pics. It was dusk and everyone had their headlights on except for this car. My writer juices started percolating. I'm still working on what I'll do with it, though. But, definitely very mysterious/dangerous looking/feeling. So cool!

That gnome totally looks possessed! I love that! I would have been in on that in my high school days for sure. :)

James Vorhath swore that gnome was alive. His wife, Hazel, insisted he brought good luck and pointed to their thriving azaleas as evidence. In fact, she tapped it's red, peeling head everytime she walked to their mini-van. He swore it's malevolent grin grew wider under his wife's touch. And he KNEW she had placed it farther from the house, yet this morning it was right by the front door.

Me, I just try to spell as many dirty words as I can in one game...

I just did a sweet teen romance with "green beans" as a writing prompt from storypraxis(dot)com. :D

Linnette~ Always amazing what gets those creative thoughts going, isn't it?

Jessica~ One of my students (who doesn't know about this blog) randomly announced today, "Gnomes are the most evil creatures on the planet". Ahh, the minds of the teenagers.

Teri~ That's good, too. Your plot about the scary messages, not so sure about the dirty word thing :)

Interesting plot ideas. I have a snake in my debut novel, but since it's a historical there's no car involved. Some screaming, but no car. =)