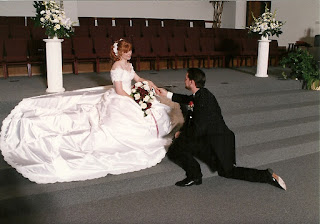 My current work in progress is non-suspense romance. It was a nice change to write about love that didn't involve the characters standing over dead bodies or fleeing for their lives.
I wrote most of the story as a NaNoWriMo last year. I made over 50,000 words, but I didn't actually finish the story. This week I added about 4,000. Two of those words were THE END. Of course, I know it isn't the end. I have rounds and rounds of revision before me, but right now I am basking in the "completed story" glow.


So, in celebration of the two proposals in the story. I want you to tell me your story! How were you proposed to? Or did you do the proposing? What would be your idea of the PERFECT proposal?
Here is my story:


The week before school was to start in 1998, I was helping a friend set up her classroom. I stayed late and chatted with her knowing that my then-boyfriend, would work until 5:30 or so then wait until at least 7:00 to head my way to avoid rush hour traffic.


I arrived at my apartment to FIVE messages from Scott on my answering machine asking if I wanted to go to dinner.  They started out casual:
"Hey, got off early today. Thought we could go to dinner. Call me at my parents' house."


I remember saying aloud, "Good grief, if he's that hungry why doesn't he just get something to eat."


But, I called him at his parents' house (which was much closer to my apartment than his apartment was at the time) and offered to meet him there.


When I arrived he was acting very strange and barely even hugged me. I found out later, it was because he had the ring in his pants pocket and was worried I would feel the box. We went to Outback Steak House (which is funny because it is not a favorite for either of us).


Right after we ordered our drinks, I remembered all the dust I had been touching all day and excused myself to wash my hands. When I returned and lifted my napkin from the table, a small box was under it.


I remember staring at it, wondering how it got there. Scott reached across the table and took my hand, "Aren't you going to open it?" he asked. I just shook my head. He opened it and said some words (that honestly I don't remember) but I heard the important ones.

"Will you marry me?"


This proposal wasn't exactly a surprise. He had already asked my Dad (who thought it would be hilarious to make me think he had told Scott no).  You can read about that experience here.


It wasn't what I would consider his most romantic gesture ever. You can read about How He Won My Heart with a Hammer here.


But I can tell you, almost fourteen years later. I would still say yes.
Posted by Dawn Alexander at 8:17 AM

My ex-husband didn't have a romantic inkling in his head and obviously the marriage didn't last, but the way he proposed was accidentally charming.

We were on a 400 mile road trip to see my parents, miles from nowhere (before cell phones) when the car blew a gasket, literally. I got out of the car completely historical, he got out of the car, dropped down on one knee and asked me to marry him.

He'd planned on doing it at my parents, but since I was so upset he wanted to cheer me up.

Fate couldn't have been any nicer. My car, a Volkswagen Vanagon, was stranded in the parking lot of a campground in the beautiful Blue Mountains in May. We used the rangers phone to call my dad to pick us with his trailer the next day.

The ranger invited us sleep in the parking lot and to join the campers for a pot-luck and campfire stories that evening.

I'm happily remarried now to a very romantic man, but I'll keep that story for another time.

I don't remember my husband actually asking me. We started dating when I was 15 years old. By the time I was a senior in high school, it was sort of a given we would get married.

Since we were still just kids, we went to the local Service Merchandise (does that place even still exist?) and picked out a set of inexpensive rings which he put in layaway.

We were married the same month I graduated high school and are still happily married today... we just celebrated our 21st anniversary last month. :)

Well, my tale is slightly less romantic: My Big Guy and I had been at a party in the town where we both went to college (but where neither of us were living). After the party, we were staggering through town to the home of another friend with a couple of spare couches, when we passed an apartment complex with a pool.

"Did you ever sneak in to Fox and Hounds pool at night?" I asked him. "I never did."

So. We stripped to our skivvies (I wasn't quite brave enough to get totally nekkid in a pool that was in view of about 100 apartment windows) and jumped in. I guess since I wouldn't take off my underwear, we had to actually talk to each other, and there must have been just enough beer at the party we'd been to, because all of a sudden, TBG asked me to marry him.

I told him he had to ask my dad first. He did, and here I am, an old married lady!

So where did I get engaged? Almost skinny dipping in the Fox and Hounds pool at 3 a.m. Totally romantic.

Teri- I think it is very romantic! ;)

I love your story! So glad a played a part (even if it was a small one :)