Saying Goodbye
First, I must ask your forgiveness for the personal, non-writing related nature of this post. I have some great writers lined up for Tell Me Your Story Tuesday. I am very excited about them and invite you to come visit in the next few weeks and say hello.
But today, I need to say goodbye.
Monday, for the second time in less than a year, we made the decision to set one of our beloved four-legged friends free from suffering.
All I have to say about that is, sometimes, being a grown up sucks.
These were our first two "children" 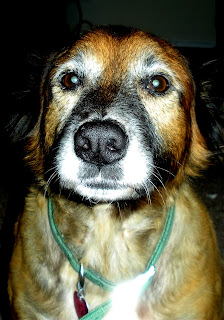 This is Attie. The picture doesn't do her justice. She was a large, beautiful Australian Shepherd with a thick coat and a love for food.  She liked to tuck one foot under when she laid down and hated house flies with a passion. When our other dogs knocked down the fence and were caught by animal control, the officer told us even though Attie was on the back patio when they caught her friends, he tried to coax her to the truck, worried that with no fence, she would go into the street and possibly be hit by a car. She refused to  leave the patio. That was exactly where we found her when we returned home hours later. Waiting to tattle  on the other dogs.
We adopted her at six weeks old in February 1999. She left us in June of 2010. 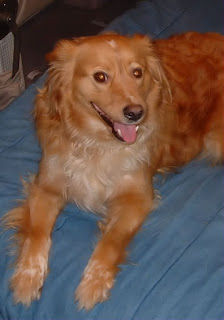 This was her constant companion, Chase. We adopted him in May of 1999. He was already over a year old. The shelter workers told us he had lived on his own in a field for about three months before they were able to coax him into the car. He wiggled his whole butt rather just his tail and was an escape artist. He was on a first name basis with animal control in one city. When we moved to a trailer park, he found another family that he liked and would frequently go visit. They would let him come in, play with their kids and eventually bring him home. When we moved to our current house, he discovered a special place under the fruit trees in our backyard where he was content to spend the day watching the world go by.  He was with us until yesterday.
So, tell me a dog story today. Or a cat, bird, iguana, whatever your animal friend of choice may be. It doesn't have to be about saying goodbye. In fact, I would love to hear some funny stories about their goofiness. I want to be reminded of great it is for them to win our hearts even though it hurts this much when we have to say goodbye.
Posted by Dawn Alexander at 3:01 AM

I had a cat that thought she was a dog. She'd play fetch with a little fuzzy mouse. I'd throw it into the kitchen towards the sliding glass door and she'd bring it back. She didn't have a tail, which made her a bit of a clutz. From time to time she'd get overexcited, run too fast, and slam into the glass door so hard that her butt would swing up over the top of her head and hit the door, too.

She adored pizza and we had to lock her up when the pizza delivery guy came for his own safety. She actually bit through my mom's fingernail when she was daring enough to offer Dinah a piece of pizza.

The first day she gave us the slip and got out of the house, we found her shortly afterwards outside cuddling with the dogs. She was cantankerous and un-snuggly, but I loved her and still miss her.

Hope you and yours are feeling better soon. It's hard to be a fur mommy at times like this.

Aah, Scooter. Thank you so much for sharing your story.It made me smile. Sounds like a cat full of personality. I have never heard of one that adored pizza. That is great!

I should say that she's still alive. She became too aggressive with my neighbors' property and was beating the crap out of my other cat. The other cat developed chronic urinary tract infections from the stress. With a grudging heart I gave her away to a lady with some land. She's a barn cat now.

The first week she was with her new owner, she disappeared. Rachel cried when she told me about it. I told her to leave a pizza on the back step. She came back that night, and has never left since.

Haha. That makes it even better!

My oldest had a parakeet named Meeko that he just adored. Meeko would let himself out of his cage and come looking for us when he wanted attention.
One night, I came home to find a mess of bloody feathers in the spot where our shepherd/lab mix, Lucy liked to lay and chew her toys. Oh my.

So...my husband said there was no way we could tell Dan that Lucy at his bird. So we told him Meeko flew back to South America to find his family. He mourned for a day and then asked for a hamster. So we bought a hamster.

The next morning, I went to get Dan up and saw the hamster cage was open..."Dammit, Dan, I told you to make sure that cage was secure! Where is that hamster?"

Dan, pointing, "AAAAGh!" and there, sure enough, on the floor next to his bed, was Charlie...another Lucy toy. I keep telling my husband that this is HIS fault for making me lie about the first pet murder...

We got fish after that.

Haha. Teri, thanks for the laugh. I had a bunny that my parents convinced me had "hopped out of the yard while the gate was open."

When I was in college something was said about it and my mom's response was "you would be so mad if you knew what happened to that bunny."

Yep, the our poodle killed it. Evidently in some kind of attempt to cross breed.

I stayed mad about that for a few years :)