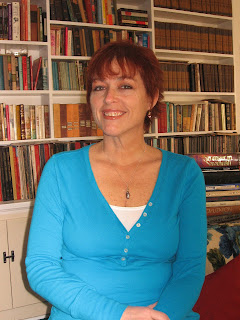 ANGI MORGAN!
Angi stopped by to talk about her latest release
.38 Caliber Cover-Up
as well as her previous book
Hill Country Holdup.
She also has a give-away for you!
Let's get to know Angi!

Do you have a writing routine? What does it look like? Where do you usually write?
I wish. Seems the more I try to have a routine, the more the universe decides to send family, friends, even strangers to the door/phone/whatever to slip me off track.  I actually write all the time. Anywhere. But I wrote .38 CALIBER COVER-UP sitting on the front loveseat with my knee propped up after knee surgery. It kept me typing on my laptop. The “short” nine-week-until-it’s-due contract kept my behind glued to the loveseat. My doctor actually liked the concept of me not doing a thing except my knee exercises.
Is the life of a writer what you thought it be? What is different?
It’s better than what I imagined. I didn’t have any illusions. I’d heard for years that you just exchange one set of problems for another when you sign a contract. No illusions. But what I didn’t count on was the social media aspect and never never never having enough time for it.
What is the best advice you have received about this journey?
Cherry Adair and Sharon Mignerey spoke to me when I first sold, after the congratulations, they both said: Don’t get wrapped up in the sale or the promotion. Write. An author’s job is to keep writing.
What advice do you wish someone would have given you when you were starting out?
The best advice? Learn about social media BEFORE you sell. It’s the way publishing is heading. If you aren’t comfortable...get that way at your own pace PRIOR to selling when you’ll be so busy your head will be spinning from all the fun. Do it now. Don’t wait. Don’t put it off.

You mentioned once that your new book is based on a character from the first book who marched in and demanded his own story, tell us about that.
Erren came to me when he was around twenty years old (2003), much too young to be a hero. But his character was very vivid and he definitely stole the scenes (See Jane Run). During the 2009 revisions (Hill Country Holdup), Erren was suddenly 28 years old, a burned-out DEA undercover cop, who envied the relationship of my hero & heroine. And again, I had to hold him back from stealing the end of the book away from Steve. Erren definitely has lots of character.

What do you do to fight burnout? Do you ever worry about "running out of stories"? How do combat that?
I don’t believe in burnout. I think writers are completely insecure and very needy. LOL  And when we get discouraged, it’s easy to say, “WHY AM I IN THIS BUSINESS?”  But ultimately, it IS a business. We can do everything we can to prepare to sell, but the actual purchase of our work depends on timing, the market, and personal taste of the editor (which I think continually grows).  Interesting question--ME? Run out of stories?  Actually, when writing .38 Caliber Cover-Up, I think I finally “GOT” what an Intrigue is. And since I want to write for the line a long time, I went through all my story ideas and none of them seemed to really fit what I wanted to do. I was definitely worried that I wasn’t coming up with anything new.  Then I submitted the story. Gave myself some time off...and there they were. The new characters, the new titles, the new ideas. I went to San Antonio to work, research, and relax... and there I was plotting a murder at the bowling alley. I went to the State Fair with the family... and sure enough, I was plotting a murder by corn-dog-stick. And when in New York City... getting on the plane...watching the taxi line... YEP YEP YEP... story, story, story.
So if you’re fighting writer’s fatigue or burnout or a block. Switch your mode of writing (laptop/pen & paper), switch your seat (desk/outside/mall/soccer practice), and then write about your surroundings. HILL COUNTRY HOLDUP began as a writing exercise on getting sounds and smells into my writing.

Tell us about the blogs you participate on and what is interesting about them.
My personal blog? I’d like to have one connected with my website. It’s that time thing again. LOL  But I did begin a new blog on December 1st with six other debut authors. Get Lost In A Story features authors and their new releases at least five days a week (sometimes all seven). Lots of fun information for readers, lots of prizes, and lots of great authors. I blog on the Intrigue Authors blog at eHarlequin every other week. I’m a regular contributor on the Daily Dose  as part of the Bloody Pen Sisterhood. A regular contributor on Blame It On The Muse where the focus is inspiring/helping writers.
I understand you  visited the inner sanctum of Harlequin in New York, tell us about that!
It looked like a regular office for the most part with the exception of “super” authors’ book covers on the wall and books on the shelves.  Can you believe that my batteries went dead in my camera during the visit? But I have some cool pictures of the outside of the building on my Facebook page.

Your husband went on stage with you won the Golden Heart award. It is such a sweet story.
I tore up my knee doing my day job, most recently...but in my younger (much younger) days I played Powder Puff football, was on the drill team, and was a catcher for adult softball. I have no cartilage. So when conference rolled around, I was on crutches. Had to promise my surgeon that I'd visit DisneyWorld in a wheelchair. But I was up for the Series: Suspense & Adventure Golden Heart (RWA unpublished writing award).
The person in charge said: Angi, the hotel wants to put in a ramp... "Nope. No way. If I win, Tim will be here to help me on stage." And then it happened. I won. He tried to stop at the top of the stairs and I brought him all the way to the lectern with me. Being superstitious, I hadn't written an accept speech, but I'd practiced a couple of things: thanks, the book sold, too many people to thank by name...and no one knows who the book's dedicated to: only Tim. I've shared the story of why Tim encouraged me to write before, suffice it to say, he was surprised. My guy's supportive. He's terrific. And he never stopped believing in me.
What's next for you?
Keeping my fingers crossed that the series I’m proposing is accepted. It’s about...well, my titles say a lot: San Antonio Showdown, Ambush at the Alamo, & River Walk Rescue.  And of course, I’ve got that airplane/taxi line story-line that’s just waiting for a hero and heroine.  What’s next? I’m hoping for a long-line of Intrigues (and maybe a four-book Scottish Time-Travel somewhere in the future).

What has been the best part of this journey for you?
The people who are genuinely happy for me. The many writers, family, and friends who are excited with each step of the journey. But most of all...the professional acknowledgment that holding the book in my hands means. God above knows I had lots of support and help along the way, but... “I FINALLY DID IT!”

Thank you  for sharing your story with us.

THANKS SO MUCH for the interview, Dawn.  Each time I write down answers about my writing journey, it makes me more appreciative of how many people and how much work I’ve actually put into my writing career. I really hope fans love my books so I can keep writing & creating the stories.
I have a copy of Hill Country Holdup for one of the commentators. I can only mail to US residents only, but I have an electronic ARC if the winner is located internationally, or in Alaska or Hawaii.  THANKS AGAIN !!
You can check out more about  Angi at www.angimorgan.com
Check out the book trailer for . 38 Caliber Cover-Up
Check out the book trailer for Hill Country Holdup
Posted by Dawn Alexander at 2:05 AM

Great interview! Angi, you so right about remembering this is a business and it's our job to write the best story we can. We just happen to have jobs we love!

Congrats on the second book and I'm looking forward to the new series.

Awesome interview!! Would love to read :)

Fantastic interview! Thank you both for sharing, I'm leaving encouraged and inspired and ready to read .38 Caliber Cover Up.

Hi Jerrie !
Thanks for stopping by today and I'm keeping my fingers crossed for you, but I know you're writing's good enough to take you all the way!

Lynda, I can't wait for you to read it and tell me what you think. Hope you've let all your friends know too!
>>grin<<

Dawn asked me to give her the link on my website to the story of what my sweetie said to me when he told me I was a writer. I have lots of articles, but it's titled--Receiving the Call: The True Story.

Candie, I hope you are inspired. Cause if *I* can figure out how to make things work in this crazy business...anyone can !! LOL

Just wanted everyone to know that if they already have my books, I've got a month-long contest that ends March 6th.
~ ~ ~
38 DAYS OF .38 CALIBER

HUGS to you Desere !
Thanks bunches!

Angi;
Thanks so much for sharing your journey. I am finding that the best part about writing is hanging out with writers. Everyone is really different, but the common denominator seems to be niceness. Of course, maybe the mean ones just don't hang out online. And that's probably a good thing.

Very nice to cyberly meet you Teri Anne !!
Woo Hoo I made the nice list and will be expecting a very nice gift from Santa this Christmas (SEE Tim! If you're reading this... LOL)

~~Angi
(And I'm truly glad the not-so-nice don't hang with us that oftem! Welcome to the Writing Community!)

Thank you Kym !
I'm so glad you're coming along with me !

THANKS SO VERY MUCH for having me today, Dawn. It's been a blast. I appreciate everyone stopping by. Draw a name and I'll get with whoever wins. If they already have a copy of HCH, I have some other books to give away.

Thank you so much for being here. I will leave the contest open until midnight tonight and draw a name then.

So, readers, pass the word and send your friends over to say hi to Angi!